Book of the Week: He Gave Gifts Unto Men: God's Plan for Ministry in the Kingdom 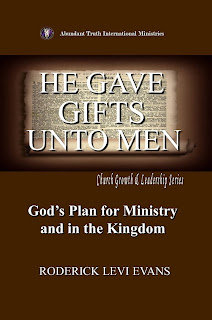 Ministry is a valuable part of the Kingdom. God anoints individuals in the Church with ministries and gifts to glorify Him. However, as the day of the Lord hastens, we find many believers entering into ministry with wrong motives. In addition, others are pursuing gifts for their own personal gain. This publication will give believers a pure perspective for ministry.

Amazon.com
Ebook Versions
Excerpt:
God chose Israel to be a special people unto Himself. This was done so that all nations would accept Israel’s God as their own. They were to participate in the salvation of the world.
Ye are my witnesses, saith the Lord, and my servant whom I have chosen: that ye may know and believe me, and understand that I am he: before me there was no God formed, neither shall there be after me. I, even I, am the Lord; and beside me there is no saviour. I have declared, and have saved, and I have shewed, when there was no strange god among you: therefore ye are my witnesses, saith the Lord, that I am God. (Isaiah 43:10-12)
God told them that they were His witnesses that He was God. Israel was supposed to display God to the world, and thus turn the nations unto Him.
When Israel disobeyed God, He anointed men to aid in their salvation. God anointed men and women that would help them remain in right standing with Him. The priests were anointed by God to make sacrifices for the sins of the people.
The judges were anointed by God to deliver the people. In addition, the prophets were anointed by God to cause the people to return to God rather than face His judgment. God anoints us today for the same purposes:
1) We are anointed to intercede and pray for one another as priests.
2) We are anointed to help restore and deliver one another as judges.
3) We are anointed to encourage one another to serve the Lord as prophets.
God anointed individuals in the Old Testament for Israel’s benefit. All in the Body of Christ are responsible to fulfill the charge given to Israel; we are to be witnesses to the world. In addition, believers are instructed to encourage and exhort one another in their salvation. However, we find that Israel failed and God promised that He would send a Messiah. This Christ would not only come for Israel, but for the world.
at March 25, 2021 No comments:
Email ThisBlogThis!Share to TwitterShare to FacebookShare to Pinterest

Book of the Week: I Will Give You Pastors: Examining the Pastoral Office in the New Testament Church 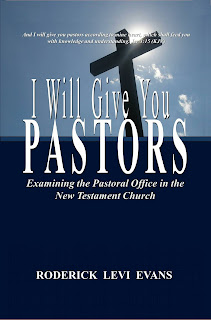 The focus of this book is to bring clarity and understanding to the ministry of the pastor. This information will help individuals to recognize the operation of this gift in their lives and in the lives of others. It is our hope that believers will develop a greater respect and appreciation for the pastoral office and gift.

Amazon.com
Ebook Versions
Excerpt:
The Facts of Pastoral Ministry
Pastors help the people of God to grow/prosper through their ministry. They do this through their ministry of the Word. Their congregants should be able to feed and mature.
And I will set up shepherds over them which shall feed them: and they shall fear no more, nor be dismayed, neither shall they be lacking, saith the Lord. (Jeremiah 23:4)
Pastors lead by instruction and example. We must follow. Along with the ministry of the Word, pastors must be examples.
A natural shepherd does more leading than talking. Even if the pastor has not said one word, the people of God should see the Word demonstrated in his lifestyle.
Remember them, which have the rule over you, who have spoken the word of God: whose faith follow, considering the end of the conversation. (Hebrews 13:7)
Pastors are to represent the heart of God and care for the Church. Pastors should take on the nature of the Good Shepherd. They are protectors over the flock of God as watchmen.
And I will give you pastors after mine own heart, which shall feed you with knowledge and understanding. (Jeremiah 3:15)
Pastors must guard against the Pharisaic spirit: preaching and teaching only for the praise of men. They have to remember they are privileged to lead.
They must not look upon the people of God as their servants, but rather be ready to serve. In doing so, they and the people of God will grow into the fullness of the stature of Christ.
at March 18, 2021 No comments:
Email ThisBlogThis!Share to TwitterShare to FacebookShare to Pinterest

Book of the Week: Precepts for Kingdom Living: Protocols and Perspectives in the Kingdom of God 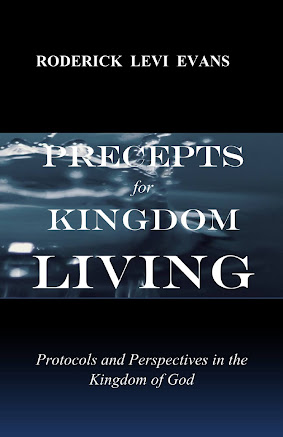 The kingdom of God is revealed through the acceptance of Jesus Christ. He told Nicodemus that unless one is born again, he cannot see the kingdom of God. However, those who have received Christ are members of the kingdom of God. There are standards and protocols that exist in the kingdom of God. In this first book of the life in the kingdom series, we will explore seven foundational precepts concerning the kingdom of God. In understanding these precepts, one will live a successful life in the kingdom of heaven. Book 1 of 2.
Available here:
Amazon.com
Ebook Version(s)
Excerpt:
“Who can bring clean out of unclean?” Before answering this, let us consider some truths. God is the author of life. His very words contain creative power. When He created the earth, He did it through the power of His famous words, “Let there be…” Until this present day, all things that were set in motion remain by the power of His word.
From other scriptures, we discover that aside from the power of His words, God’s thoughts and intents will certainly happen. In the book of Isaiah, God declares,
The Lord of hosts hath sworn, saying, Surely as I have thought, so shall it come to pass; and as I have purposed, so shall it stand (Isaiah 14:24)
Whatever the will of the Lord is shall surely happen. Without even speaking, if God thinks or purposes to do something, it will happen. Thus, we understand that God possesses all power.
Because of the awesome power of God, the answer to the beginning question is revealed. Who can bring a clean out of an unclean? – God can. God brings impossible things to fruition. The Bible abounds with accounts of God doing the impossible in the midst of man’s impossible situations. Jesus reminded the disciples that with God, all things are possible.
But Jesus beheld them, and said unto them, With men this is impossible; but with God all things are possible. (Matthew 19:26)
Though men readily accept the awesomeness of God’s power, some do not believe that this power is available in times of personal failures. If God is able to do all things, then our failures in life do not frustrate His work. This is assured if we desire His will for our lives. If we desire His will, we will continue to experience kingdom transformations in our walk with Him.
Whatever God has purposed for your life will come to pass if you continue to follow Him. However, many members in the Body of Christ become complacent in their relationship with the Lord because they believe they have made too many mistakes. This leads to self-doubt, regrets, depression, and frustration. These things will bring death to one’s relationship with Christ.
The Bible is full of stories describing man’s failure and God’s restoration. Even God’s choicest servants failed. Yet, they were able to recover and receive what God had for them in their lives. From Genesis to Revelation, the cycle of failure to redemption to destiny is repeated. This cycle is repeated in the lives of believers today, who are partakers of the kingdom.
at March 11, 2021 No comments:
Email ThisBlogThis!Share to TwitterShare to FacebookShare to Pinterest

BOOK OF THE WEEK: KINGDOM CONCEPTS: EXAMINING THE DYNAMICS OF KINGDOM LIVING 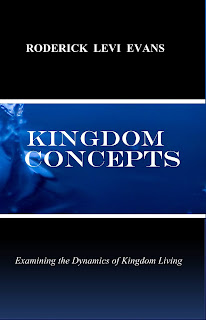 The God of Restoration

God promised the nation that it would be fruitful and bring forth. Though many lives were lost and it seemed like they would be extinct, God would restore. God specializes in restoring the lives of people. Israel’s history reflects this throughout the pages of the Bible. Since He will not change, the Christian can be assured of His willingness to restore them in spite of negative events.

restore - : to put or bring back into existence or use; to bring back to, or put back into a former or original state

Restoration is provided to those who have suffered loss and setback. God’s work of restoration through Christ does not end after entrance into the kingdom. He continues to restore those that have called on Christ’s name. Even as He promised Israel restoration through Joel’s prophecy, Christians can expect the same.

And I will restore to you the years that the locust hath eaten, the cankerworm, and the caterpiller, and the palmerworm, my great army which I sent among you. Joel 2:25 (KJV)

Israel experienced loss because of their actions, yet God promised to restore them. How much the more those who have believed on Christ? If a believer sins and offers sincere confession unto the Lord, he can expect restoration. Restoration not only in His walk with God, but also in natural things according to His will.

Many feel that if God forgives them, they cannot expect anything else. They feel He will not give them another job if they messed a previous job up. Or, some feel they may never be able to operate in ministry because of failure. Others have similar feelings concerning other areas in their lives.

They have the mindset that “I knew better” or “it was my fault.” Israel was at fault and God restored the nation. The Christian has to let God decide how He will restore and not “think” for God. The believer must submit to God, knowing He will forgive and restore.

Wherefore he saith, God resisteth the proud, but giveth grace unto the humble. Submit yourselves therefore to God. Resist the devil, and he will flee from you. James 4:6-7 (KJV)

Some think they are humble when they acknowledge their sins. True humility is reflected when you can admit your sin and receive God’s forgiveness. Some admit sin, but believe their feelings over what God has said. John told us that He is faithful and just to forgive us (I John 1:9). He will restore you as you trust in His faithfulness and abide in His love.

There is no fear in love; but perfect love casteth out fear: because fear hath torment. 1 John 4:18 (KJV)

When we abide in His love, we strip the “pits” of guilt, shame, depression, and fear of their control. We are free to move forward and operate in the purposes of God.

On D.E.C.K. with Roderick